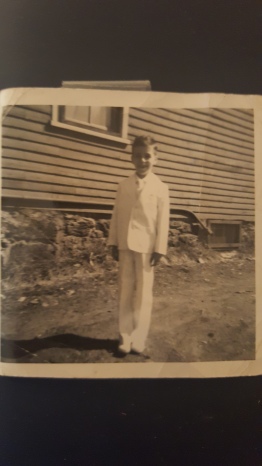 The most memorable of one of my “turns” with the belt was back in the summer of 1964, the year that I made my First Communion where I wasn’t quite so lucky as my sisters.  We lived in Jamaica Plain on Green Street, and I loved going to church and catechism classes and the way it made me feel holy, and was thrilled when finally the Sunday came that I got to put on the white suit and shoes, and walked with pride up the aisle at Our Lady of Lourdes church, hands clasped, to receive the Eucharist.  My parents never went to church except for weddings or funerals but they insisted that we all did every Sunday.  Not sure why they cared about our spirituality when they neglected theirs, but I didn’t care because going to church made me feel safe and it was full of goodness.  I wore the suit all day feeling like a celebrity, and got cards with money in them from relatives and ate candy and was very happy.

As I was getting dressed for school the next day, my mother poked her head into the room.  “Wait, what are you doing?  Put on your nice communion clothes for school!”

I was mortified.  She’d mentioned doing that the night before but I pretended not to hear her.  Proud as I was of making my First Communion and wearing that white suit, no way was I going to face the humiliation I knew would come from my fellow first graders at public school if I showed up in it.

“But I don’t want to wear it Mommy!” I heard myself shout.

“That suit cost twenty dollars, so get your ass in it now!” she snapped back.

I didn’t want to disobey, as after all, I had just taken a giant step closer to God by performing my first confession, reciting the Act of Contrition, and receiving the Eucharist.  What could I do?  Crying, I got dressed, grabbed my lunch bag that I knew contained a sandwich made with a thick cut slab of government cheese with mustard, and slammed the door to the apartment on my way out.  I had to walk up Green Street to where it intersected with Washington Street, then go up the iron steps, thick with layers of green paint, and cross over the pedestrian walkway that took you to the now long gone “El” platform to catch the train, then down the stairs to the other side of the street to continue up Green towards the red brick school at the top of the hill.  As I climbed the stairs, eyes red, I made up my mind that I’d just play hooky!  I knew that was wrong, but I knew every bully in school would seek me out if I showed up dressed that way.

Wandering around the neighborhood I must have realized I stuck out like a miniature Pat Boone wearing that white suit and those shoes and that I couldn’t do that all day.  So, heart racing, I decided I’d just go home and surely mommy would understand.  She wouldn’t want me to get beat up at school would she?  I knew God wouldn’t want that.  I trudged back up the stairs to the apartment and opened the door.  My mother turned to me, looking stunned.

“Just what the fuck do you think you’re doing?” she demanded, cigarette smoke streaming from her nostrils.

“Please mommy, I don’t want the other kids to tease me!” I said pleading.

“Are you ashamed of being a damn Catholic?  Is that it?” she sneered.

“Go change and stay in your room until your father gets home!”

Now the fear really set in.  Maybe she wouldn’t say anything.  Although she always used that threat she didn’t always follow through.  After all, wasn’t it all of us against him?  We’d hear them in their bedroom some nights and sometimes heard loud but muffled voices, and sometimes what sounded like her crying.  Next day she’d tell my sisters that it was awful, and she’d warn them that they all had to “watch out” for my father, whatever that meant.

I heard him come into the apartment and he and my mother talking in the kitchen although I couldn’t make out a word of what they were saying.  I was in my room when he came storming in.   I faked left and went right and slipped around him, running to the living room where I tripped over the hassock in my failed escape attempt narrowly missing bumping my head on Jerry, then dropped to the floor and curled up in a defensive ball, readying myself for the first blow.  He grabbed me roughly by the left wrist and held me in a semi-dangling position as I struggled unable to break his grip with my other hand, another useless tactic, all the while writhing like a skinny fish on a hook.  I could see my mother’s silent shadow in the hallway just as he twisted me around.

By the time he was finished (and exhausted) I had a series of striped welts that had raised themselves on an angle down my back.  I remember going in the bathroom right after it happened and looking at them over my shoulder using my mother’s make-up mirror and thinking how odd that they could be so red and yet not bleed.  It was hot and humid the next day, and my mother made me wear a T-shirt to the MDC pool so that no one could see as I ran through the sprinkler because we weren’t allowed in the pool itself because she was afraid of the water.  But once the shirt got soaked, people saw the welts anyway and I was embarrassed by their stares.  She stopped me by the front door as I was leaving.

“You know your father cried about hitting you,” she said.

Good, I wanted him to feel bad.  I imagined him, sobbing in the dark sorry for what he did after he must have realized that no little boy would want to go to school dressed in their First Communion suit and what was he thinking beating me over it and then him coming to my room to rub my head and tell me so and promising never to do it again but the image faded.  I would have forgiven him in exchange for that.

The way she said it made me feel as if it was I that should reach out and somehow console him rather than the other way around.  I guess I never forgot that beating in particular because making my First Communion was such a big deal to me.   No, if he really did cry that way as she had said, it must have been because he was seeking her forgiveness, not mine.

How else would he have gotten her to go into the bedroom that night and not lay on the couch with a wet facecloth on her forehead?  Looking back I could see how he had proven me correct later that evening when they went out and came home from shopping with Trudy clutching on to whatever was her latest treasure stuffed into the crinkled plastic bag from a trip to Zayre’s.   This time the bag contained a new pearly white blouse with ruffled, puffy sleeves.  It was just like the one she’d seen and admired that this dancer was wearing on the Lawrence Welk show the previous Saturday.  She held it up under her chin and spread the sleeves wide for us all to see saying “isn’t it pretty?”  We’d show vague interest as hope slipped away, as always, that there might be something in the bag for one of us.

Right before bed that night I asked her; “Mommy, why didn’t you stop him when he was hitting me so hard?  I saw you watching.”  She just looked at me with a blank expression and answered in what we had all come to know by then was her patented, helpless tone.

“But honey, what can I do?”  That was the same answer she gave whenever we asked why there was never anything for any of us in the Zayres bag.

One thought on “Chapter 3, Conclusion…”